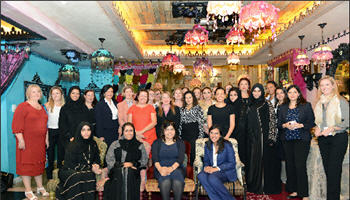 During the meeting, H.E. Fatima Al Jaber and Warsi discussed joint cooperation and exchange of the best practices to support the working and businesswomen to enhance their role in the economic life and labour market.

H.E. Fatima Al Jaber briefed the British minister about the Abu Dhabi Businesswomen Council, its achievements and future plans, noting that the Council has managed to upgrade the role of Emirati businesswomen in various economic and service activities in the Emirate of Abu Dhabi. She added that the Council has also strengthened the relations with its Gulf and Arab counterparts, and provided opportunities for women training and rehabilitation.

H.E. Fatima Al Jaber added that the Council’s registered members are 5,500 Emirati women, of whom 1,400 have obtained innovative programme licences.

For her part, the British minister expressed her readiness to cooperate with the businesswomen in Abu Dhabi through the Council.